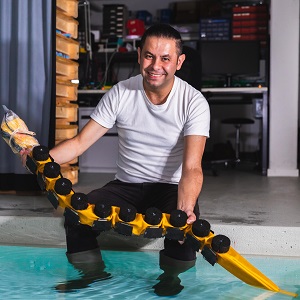 EPFL scientists have created a swimming robot that could shed light on why some vertebrates still have locomotive abilities after spinal cord lesions. The study published by these scientists will also have far-reaching benefits in enabling swimming robots to search and rescue drowned victims or monitor the ecosystem.

The swimming robot, also known as AgnathaX, was created to investigate how the nervous system works to create movements. According to Professor Auke Ijspeert, who was involved in the study, the process cannot be done on living organisms because of the sensitivity of the spinal cord.

The research team involved in the study used various techniques to stimulate the nervous system's parts to understand its functionality better. The team made the AgnathaX robot swim in a pool with motion trackers to monitor its movements. As the robot swam, the team activated and deactivated various nervous system components to understand better the neuroscience mechanisms involved.

The study shows that the central and peripheral nervous systems are used in robust locomotion. When these two systems work together, it bolsters resilience, allowing the system to continue working despite neural disruptions. These robots can swim faster compared to robots that are only comprised of one nervous system.

The study also revealed that the skin of the robots contained force sensors, whereby the communication between the robot's body and the water offered signals that generated muscle activity needed to establish the movement.

Various researchers, such as Charles Scott Sherrington, have stated that a peripheral mechanism causes neural rhythms. Hence, an organ will move in one direction until another sensory organ is triggered to move that limb in another direction. Another research by Thomas Graham Brown stated that neural rhythms originate from the central nervous system.

The debate about these two systems has since been a heated one, but the group that wins is the one that supports the central system. However, the recent study enabled by the swimming robot shows that the two nervous systems are important, as they both help in the generation of robust locomotion, and they offer more efficiency when they work jointly.