Amazon wants to ship you anything in 30 minutes

Share on Facebook
Share on Twitter
Amazon is spending crazy amounts of money on getting you stuff faster. It'll spend more than $35 billion (Yes, you heard that right, $ 35,000,000,000) on shipping costs this year, more than twice what it spent in 2017. The company recently told the public and warned their investors; it'll drop an extra $1.5 billion this holiday season as it tries to transition to one-day shipping for Prime members.

And yet this might be only a little step compared to what they are planning to do.

Amazon CEO of Worldwide Consumer Jeff Wilke told that in the future, the customer would be able to order anything and get it in less than 30 minutes when they have their full drone fleet ready. In the beginning, that will only work if the customer lives near a hub that's serviced by drones.

Amazon has built out a network of expensive fulfillment centers in the world. The advantage of these centers is their robot-army that is making the whole operation faster and more cost-efficient. With robots working insanely fast, and mostly without mistakes, Amazon could be able to reach the one-hour future delivery ambitions. It all started with Amazon's acquisition a few years ago that doesn't even rank among its five biggest deals by dollar value.

You are asking yourself how they evolved over the years?

In 2019, Amazon has a fleet of 200,000 Kiva robots in its fulfillment centers, alongside with more than 500,000 employees they hired since the acquisition. To stay ahead of competitors, Amazon needs to build even more robots. Right now, they are testing robots that are carrying packages on sidewalks.

On November 6, 2019, Amazon announced a plan to build a new 350,000-square-foot robotics innovation hub in Westborough, Mass, for $40 million. Also, Amazon is testing four-wheeled delivery robots that roll on sidewalks.

Yep, you heard that right. One day, you might see a little robot next on your sidewalk, delivering a package to your neighbor's door.

It has already a name - Amazon Scout. 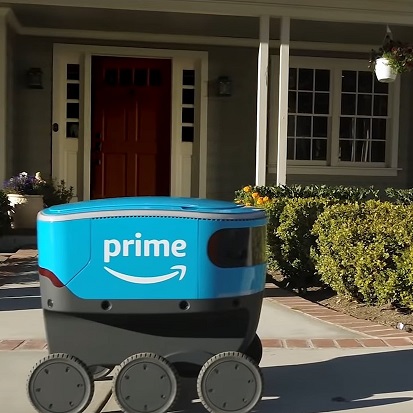 Amazon invested in a self-driving car startup, and it's experimenting with self-driving trucks. They spent more than six years of developing drones. One day, they might be able to drop packages from the sky in the customer backyards, assuming regulators allow it. But even when we wish a drone drops of our Christmas package, Gur Kimchi, who leads Amazon's drone efforts said: "We'll fly as soon as we're safe, not any moment sooner,"

So for now, we need to wait until we see robots next to us or above us.