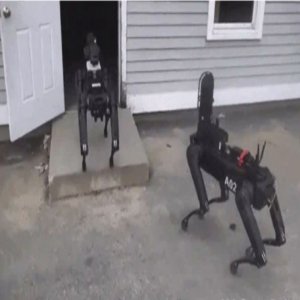 Massachusetts State Police have been Secretly Testing a Robot Dog

The use of robots in the police force sounds alien and impossible, except in popular Hollywood movies. But the impossible became a reality when the New York police department suffered a backlash from the public on the use of a robot dog.

It is no news that public surveillance in the United States has been effective coupled with the use of cameras and drones to track down illicit activities, but the use of robots seems out of place as the department has received several negative reviews on its use.

NYPD spokesperson, Edward D. Riley, explained in an email that the robot was leased to the police department to test the use of robotic devices in the physical work, which will only be for a limited time as it is not a surveillance tool. He buttressed his claim that the robots are to be returned to the company after the test and evaluated alongside similar products based on their cost of operation and level of capability.

To ensure more human safety, the license provided by Boston Dynamics forbids the use of Spot for any task that would cause harm or threaten people, hence, it cannot be weaponized. In addition, the Vice president for business development in Boston Dynamics, Michael Perry, stated that Spot has a wide range of use in all categories of the development and manufacturing industries ranging from oil and gas companies to construction, and even entertainment and he envisions the Police department utilizing Spot in conditions that are too hazardous for the human police to engage in.

Spot is an all-rounder device with a customizable open API that allows the police department to operate and compute in their details (although the police claim it did not utilize this opportunity); it is an angle 70-pound four begged machine with an inbuilt 360-degree low-light camera designed to climb stairs for surveying areas and identifying dangers.

Mixed reactions over the use of Spot in the police field

In February, a video showing the robotic dog patrolling a Bronx community went viral and was met with mixed reactions, as Rep. Alexandria Ocasio-Cortez, tweeted, "When was the last time you saw next-generation, world-class technology for education, healthcare, housing, consistently prioritized for underserved communities like this?" in support of its use.

This sparked outrage in her districts and locals opposed the use of this technology for policing and patrols, arguing that the funds should be devoted to more pressing concerns such as healthcare and education.

Although Spot is only a test-ran robot that will be closely engaged for a limited period, the ACLU is skeptical on its operability and has issued a warning concerning the use of robots in police surrounding and its possible weaponization if there was no licensing limiting it. In respect to this claim, Police in Dallas drew controversy from a shooting case that happened in 2016, when a bomb-laden robot was deployed to stop a shooter, further enhancing the robot's benefit.

Director of the technology for liberty program in the ACLU Massachusetts region, Kade Crockford, worries about the robot's deadly potential to humans and the police department's transparency on the use of robotics programs in the police field. She added that the technology Spot possesses is limitless in terms of the kind of surveillance and its range of weaponization.

To buttress Kade Crockford's views on the use of the robotic dog, executive director of the ACLU, Carol Rose, proposed the need to organize a public debate which will provide an avenue to set protection and boundary laws that will ensure robotic technology enhances human's liberty and not inhibit it.

She added that the use of robots in policing can increase racial wars and disparities and highlighted a time in US history where dogs were used against civilians in one of the human right movement.

Although, the use and development of Spot in policing created mixed feelings which were mostly negative and heightened fear among citizens, Dave Procopio, Massachusetts state police director of media communications, told the public that Spot was only used on two occasions.

These occasions demanded an assist in response to a hazardous situation and its deployment helped in the examination of items and locations and also helped clear high risk and allows criminals to be easily located.

In obedience to the voice of the citizens, the contract worth roughly $94,000 to lease Spot, the robot dog was terminated on April 22.